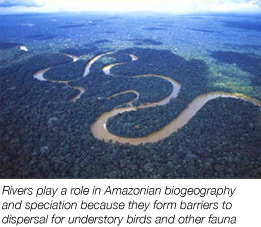 The phenomenonal diversity of tropical ecosystems raises many interesting biological questions ranging from individual adaptations to community interactions. Much of our work has focused on the suboscine clade of passerine birds, which contains over 1000 Neotropical species, most of which have simple, stereotyped, genetically determined songs. With this diverse clade as a study system, we use a variety of field experiments and phylogenetic analyses to explore four interconnected research themes (outlined below).

It is difficult to work in the tropics without running up against the problem that habitats and species are being lost at an astonishing rate. This underscores the importance of tropical conservation biology, a parallel theme which we deal with separately. 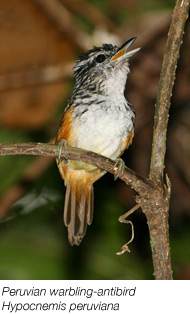 Nowhere has speciation been more active than in tropical forests, where diversity far exceeds the norm in temperate regions: a 100-ha plot of North American woodland supports up to 70 bird species while the same area of Amazon rainforest may host over 500 species. To study the factors driving diversification in the tropics, and the mechanisms allowing so many forms to co-exist, we focus on signals as key players in speciation and species interaction. We use playback experiments to examine the role of signal divergence as a barrier to gene flow (1), and we use phylogenetic comparative analyses to study correlates and drivers of speciation (2). In particular, our work has revealed a key role for species ecology and its interaction with river dynamics in driving genetic and phenotypic diversification in Amazonia (3).

We are interested in the roles of ecological selection (e.g. transmission properties of the habitat) and social selection (e.g. intrasexual or interspecific competition) in shaping acoustic and visual signals and signaling behaviour. Examples of our findings include strong evidence of evolutionary divergence in the songs of sympatric bird species (4), of a role for ecology in sexual selection (5), and of sexual conflict in apparently cooperative signalling (6). Our fieldwork in Amazonian Peru has shown a role of social selection in shaping the evolution of mutual ornamentation (7). Our studies have also shown how signals mediate species interactions in contact zones, and how interspecific interactions can drive signal convergence (8). Meanwhile, experimentation on captive birds reveals that evidence that stereotypy and convergence in male signals can be accommodated by fine tuning of perceptual abilities in female receivers (9). We are further testing these ideas in two major radiations of Neotropical suboscine birds, the antbirds (Thamnophilidae) and ovenbirds (Furnariidae). 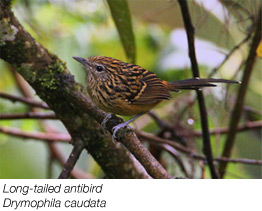 The question of how social behaviour evolves, especially in relation to the balance between cooperation and conflict, remains a major challenge for evolutionary biology. Tropical birds can make an important contribution to this field because they offer intriguing study systems. For example, our research on the subdesert mesite (Monias benschi) and the white-winged trumpeter (Psophia leucoptera), two group-living birds with unusual breeding strategies, has shown that long-term direct fitness benefits may underlie cooperation (10), that complex vocal repertoires may arise through sociality (11), and that social structure and communal signals can influence the outcome of inter-group contests (12). We have also studied social interactions via the coordinated duets of suboscine birds, and shown that females use acoustic signals both to guard their position in long-term partnerships (13), to control male behaviour (14), and defend ecological resources (15, 16).

The build-up of tropical diversity has implications for interspecific competition, both in terms of niche packing and signalling space. We are using (1) a community phylogenetic approach to investigate the role of niche-based and neutral processes in structuring bird communities in the ovenbird family (230+ species) and along a mega-diverse Andean transect (Kosnipata Valley, Peru), and (2) statistical models to the role of temporal or acoustic partitioning of song in Amazonian bird communities.

Hear the vocalization a warbling antbird duet consisting of male song immediately followed and slightly overlapped by a female song.

Audio clip: Adobe Flash Player (version 9 or above) is required to play this audio clip. Download the latest version here. You also need to have JavaScript enabled in your browser.