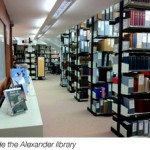 libraries in the world.  It holds extensive collections of 19th and 20th century books, pamphlets and periodicals, and an archive of ornithological notebooks and diaries. It is an international resource with the collections covering ornithology, natural history, conservation, ecology and behaviour.

Founded in the 1930’s on the personal collections of Wilfred Backhouse Alexander, it was originally housed at 91 Banbury Road. W.B. Alexander was the first Director of the Oxford Bird Census (the predecessor of the Edward Grey Institute of Field Ornithology) and on his retirement in 1945 he became the first Librarian, holding the position until 1955. The Library was named in his honour in 1947.

Today, much of the material within the collections is received via donation or through exchange schemes. The library enjoys a close relationship with the British Ornithologists’ Union and books which have been reviewed within its journal, The Ibis, are subsequently deposited in the Alexander Library.  The Alexander Library’s collections are now stored offsite but material can be ordered back to Bodleian Libraries’ Reading Rooms for consultation. The archives and rare books have relocated to the Weston Library.