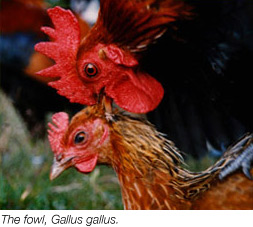 A growing component of research at the EGI is dedicated to the evolutionary consequences of sexual reproduction and the study of reproductive strategies at multiple integrated levels, from proximate to functional. We are interested in the co-evolutionary trajectories of the sexes and the conditions fostering conflict and cooperation between reproductive partners. We are also interested in the way sexual behaviours evolve through sexual selection, and examine how reproductive competition and other mechanisms maintain variation in individual reproductive success. Much of our research focuses on the functional significance of female re-mating, and its evolutionary consequences. Promiscuity generates evolutionary conflict between reproductive partners, and we study the physiological and behavioural strategies through which one sex manipulates the other at its own advantage. This requires understanding the dynamics of sperm competition and female selection of sperm triggered by female promiscuity. We are interested in the way ejaculate traits determine fertilising efficiency, and the mechanisms through which females bias the outcome of sperm competition by preferentially utilising the sperm of certain partners. We utilise a range of empirical approaches, including assisted reproduction techniques, behavioural assays, molecular tools for paternity analysis and genomics to determine the rules of engagement between ejaculates and the fitness pay-offs of different sexual behaviours.

We adopt a strongly experimental approach to pursue six main lines of research.

We have been increasingly involved in the experimental study of different mechanisms of male reproductive senescence and their influence on sexual selection and sexual conflict processes.

We are interested in the social evolution of reproductive strategies and study the evolution of cooperation, punishment, spite and altruism among reproducing individuals and among their gametes. For example, we explore the conditions under which males form reproductive coalitions, and under which spermatozoa sacrifice themselves to help other fellow sperm (Pizzari).

We study the mechanisms through which the socio-sexual context of copulation modulates patterns of male ejaculate expenditure, and how social and physical environments influence variation in paternity in promiscuous populations (Collet). In particular, we are interested in the decision-making underlying strategies of male sperm allocation, and in individual variation in such strategies. For example, we study the way social status and behavioural syndromes interact to modulate the risk-sensitivity of individual responses. 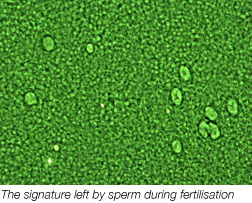 We study the mechanisms of sexual conflict. Recent work in fruitflies indicates that male seminal fluid products may represent prime candidates for sexually antagonistic traits, increasing the fertilising efficiency of an ejaculate but simultaneously imposing costs on females. We use in vitro and in vivo assays to investigate the evolutionary role of seminal fluid components in sperm competition and male manipulation of female reproductive responses in vertebrates.

We are interested in the role of genetic compatibility in mechanisms of partner choice and reproductive investment. To this end we seek to establish pre- and post-insemination mechanisms through which individuals avoid inbreeding (Løvlie, Uller), and, independently of genetic relatedness, favour partners with compatible Major Histocompatibility Complex (MHC) haplotypes.

We are interested in plasticity in female strategies, from mating to reproductive allocation, and its evolutionary consequences. For example, we study the consequences of prolonged sperm storage on the strength and direction of sexual selection and how variation in male traits generates maternal effects on offspring phenotype via differential allocation (Uller).

Playlist of fast and slow sperm and solicitation.