Evolutionary Ecology as a research field 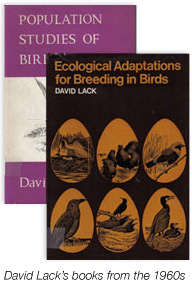 Evolutionary Ecology is the name of the research field that aims to understand the way in which the evolutionary history of populations or species interacts with the ecological background against which they have evolved, and against which they currently play out the details of their lives. It aims to understand variation at the level of individuals, populations, and species, in those traits that are ecologically important (for example being connected to variation in fitness), and the factors that contribute to patterns of diversity and assemblages of species.

The EGI has a long distinguished history in the development of the field of Evolutionary Ecology. Robert MacArthur (1) was a visiting postdoc in the late 1950s, and David Lack’s (2) books from the 1960s (Population Studies of Birds in 1966, and Ecological Adaptations for Breeding in Birds in 1968) arguably determined the course of research in this field for decades, at least as far as those working on birds were concerned. Much of the research on population biology at the EGI, which has provided the impetus for the maintenance of long-term study populations of tits, swans and seabirds has been guided by this research tradition, with important work in the development of life history biology being carried out on these populations 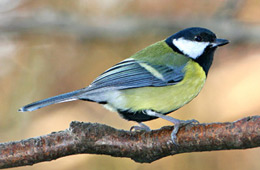 Much of our current work on wild animal populations combines ecological and evolutionary approaches. Some recent highlights include:

Tobias Uller and colleagues used combinations of experimental assays, long-term field data and modeling to explore the evolutionary stability of sex-determination mechanisms in snow skinks in Tasmania. Fascinatingly, these reptiles exhibit an altitudinal gradient in sex-determining mechanism, with the sex of lowland lizards being temperature-dependent and that of highland lizards being genetically determined. Uller and colleagues showed that these different mechanisms could be explained by selection acting differently on female fitness with respect to birth date in the two environments, and by the more stable environment at lower altitudes (see Pen et al. 2010 Nature 468, 436-U262) (3).

Ben Sheldon and colleagues used five decades of data about the timing of reproduction in great tits and winter moth caterpillars in Wytham Woods to explore the mechanisms underpinning population responses to climate change. They showed that despite major changes in the phenology of both birds and insects, these events had advanced at statistically indistinguishable rates, and that the population-level response of birds could be explained entirely by phenotypic plasticity of individuals (see Charmantier et al. 2008 Science 320, 800-803) (4).