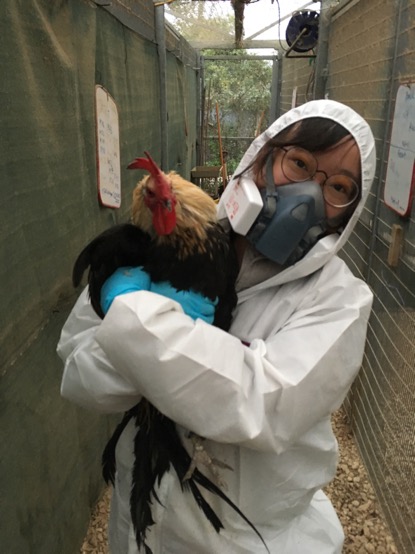 From 2012 to 2016 I studied for a BS in Life Sciences at Wuhan University, China. I conducted a small project to investigate the incentives that drive monogamous female birds to have extra pair copulations in my second year of undergraduate study. I conducted research on Neurotoxin Detection by introducing GCaMP6 gene into neuro2A cells during my third year. I completed a project on comparative genomic analysis of Anna’s Hummingbird (Calypte anna) and Chimney Swift (Chaetura pelagica) diet related genes evolution for my senior thesis.

From January 2014 to May 2014 I had the opportunity to study at the Columbia College, New York as a visiting student and from August 2015 to January 2016 I was an exchange student at the University of Helsinki, Finland. I started my DPhil studies in Oxford under the supervision of Professor Tommaso Pizzari in October 2016.

I am interested in the cognitive mechanisms of ejaculate allocation in male red junglefowl, Gallus callus, the ancient ancestor of the domestic chicken.  Sperms are expensive to produce and a male’s sperm reserves can be depleted by multiple mating, which can potentially constrain his reproductive success, particularly in mating systems where males can mate with multiple females (polygyny) and females can mate with multiple males (polyandry), generating sperm competition.  Theory therefore predicts males to evolve prudent strategies of sperm allocation to maximise reproductive success with the constraints imposed by sperm costs.  The overarching goal of my thesis is to investigate the mechanisms underpinning sperms and seminal fluid proteins expenditure strategies in the polyandrous red junglefowl.